Skip to content
Since piercing trends began: bars and rings have been pierced into flat areas of the body, with very little success. Often causing huge problems and pain for the wearer. 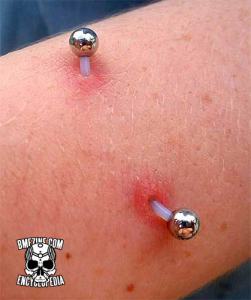 After a time Poly-tetra-fluoro-ethylene (PTFE) became the best option available. However the only real thing forcing the body to heal around this plastic was the sheer length of the jewellery and large chunk of skin involved. Often the whole process merely involved a long rejection time that gave the illusion of a piercing that was fine, for as while at least.

In time, piercers developed a bent bar, in the shape of an upside-down staple. This option is still vastly used today and has tons of success compared to its out-dated insufficient PTFE predecessor. But had and still has quite a few drawbacks: mostly the balls on the outside of the body would get snagged, A LOT and this would quickly cause the body to force the irritant out. In short, rejection. 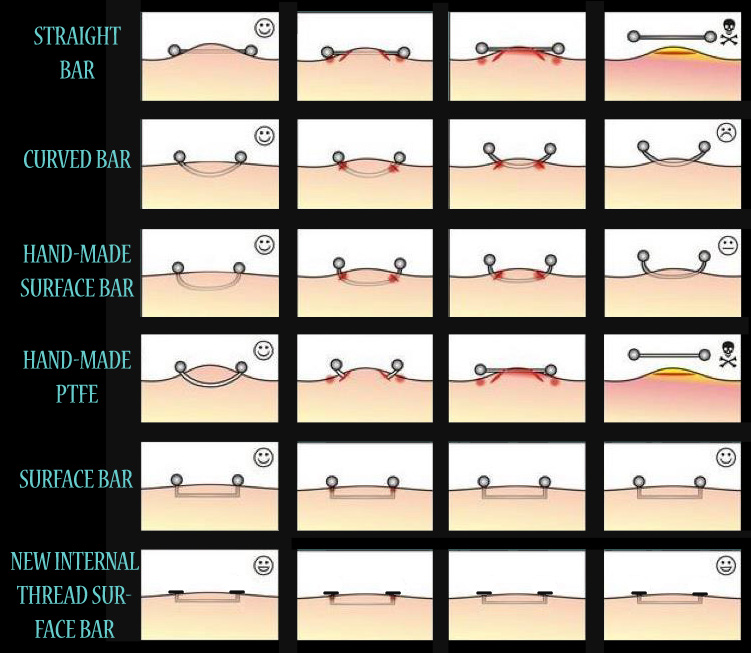 As you can see from the image above, the more modern versions of surface bars are the ONLY jewellery that can heal, long term in your body. Placement, technique and aftercare as well as our general health still play a huge part in how well our bodies heal.

As piercing has moved forward so has the jewellery.

Surface bars are now flat in the middle between the disks, this tightens the skin around the bar during the healing process helping our skin to hold it in place and causing a lot less potential irritation. Combining this with the flat dermal-like internally threaded disks the piercing lies close to the skin surface. A huge benefit preventing catches and snags on clothing.

All in all, if it hasn’t got corners: its not worth your money! and if its got balls: think twice!

Once assimilated into the Borg we began to think as one. Using our accumulated knowledge base and acquired experience to enlighten and inform :)